There Just Was No Kitty After Samantha

This is the story of one of the portrait subjects who is in the Great Rescues Calendar and Gift Book, offered at www.MyThreeCats.com.

There has not been another kitty since Samantha. Sometimes a memory is too dear, and time must pass before the heart is ready for another love.

In Samantha’s mom’s case a dramatic change in schedule just didn’t allow for another adoption for quite a few years after she lost Samantha. Her employer began reorganizing the company nationwide, and she was given an opportunity that required her to travel frequently and for several days, even weeks, at a time. In a way, it was an antidote to the suddenly empty home.

But the heart is sensitive in other ways after caring for a loved one through a sustained or chronic illness as well, less likely to take risks in many ways.

While many kitties were presented and could have done well with her travel schedule, the memory of Samantha’s long decline into kidney failure and the final months of administering subcutaneous fluids herself at home made her consider what she would do if a feline illness presented itself while she was traveling. Risky; best not take the chance, at least until the traveling is over. Sometimes that is the best decision, especially as the months turned into years.

Another portrait at the same time

Though there has not been another kitty since Samantha, there were several kitties before. In fact, when I painted Samantha’s portrait, I also painted another of three cats she had known before and who were, in part, the ones who led her to Samantha.

Honey, Tommy and Andy were mom, son and daughter and while Honey had other kittens this little family of three was a perfect combination: Honey, though petite, was decidedly the boss; Tommy, big and rangy was as sweet as candy; and Andy playful and affectionate.

Honey, in the front, was the mother, and Tommy on the left and Andy on the right were two of her kittens. “Honey was tiny, but she was the boss, definitely the leader,” Samantha’s mom said, remembering the three cats. “Tommy was big but as gentle as a kitten—Honey used to boss him around—and Andy was sweet and playful. We were definitely a family,” she continued. Honey lived into her late teens, outliving both her children, and after that the home was without cats for a while, and then…

During a visit to a friend who had cats, Samantha’s mom realized she needed the love and affection a cat provides. At a local Humane Society she saw this tiny kitten alone in a cage. Her large yellow eyes begged her mom to save her. The kitten was very small and delicate, her coloring totally black with very fine silky fur; asking the attendant, she learned the kitten was a Burmese and was the runt of a litter. She picked up the kitten who immediately cuddled on her shoulder and she was in love! Then she thought it would be nice for the kitten to have a playmate and selected another kitten, holding both in her arms. The Burmese would have none of this and hissed at the other kitten, possibly due to her bad experiences being bullied by her litter mates. Deciding the kitten needed her as much as she needed the kitten, she took the kitten home, named her Samantha, and had 19 wonderful years with her. (From Great Rescues Calendar and Gift Book)

When we planned the two portraits, Honey, Tommy and Andy would be “in heaven”, so they look as if they are in the clouds.

When we ultimately chose Samantha’s pose, that one perfect photo of her awakening from a nap on her little wicker chair, nestled among pillows in the sun, she was looking upward at just the right angle that when we hung the portraits on the landing in her home she was indeed looking up at them, and thanking them for leading the way for her mom to find her.

And Samantha’s mom remembers taking the photo, just capturing that moment when Samantha awoke and gazed around sleepily, relaxed and content.

I can attest that it’s difficult to photograph black cats and used my own black cat, Kublai, as a model for the highlights on her face, paw and body. I remember, initially thinking Samantha was a fairly large kitty, comparing her to the chair and thinking it was a papasan-style or one of those grand wicker chairs I used to see at Pier One and other places, with a deep seat so the pillows were off in the background, but it turned out to be a petite little chair, just right for a petite little kitty.

And not only does the heart hold the memory dear, but also the things attached to the memories. Samantha’s mom still has the little wicker chair, knowing it’s just an object, just a part of all the things Samantha touched in her home, she’ll always keep it as part of the memory of Samantha.

I never met Samantha for all the times I visited this person’s home, though she was still around but in her late teens when I painted the portrait, and not feeling well. After the portrait was completed her mom told me that Samantha had developed renal failure, and she was giving her subcutaneous fluids on a regular basis.

I’ve done this plenty of times since then, but at that time I had not and was greatly intimidated when my black cat, Kublai, needed them a few years later. I remembered Samantha and her mom, and that gave me the reassurance if they could get through it, I could do it too. I’ve learned so much from both the cats I’ve known and the persons who’ve loved them. 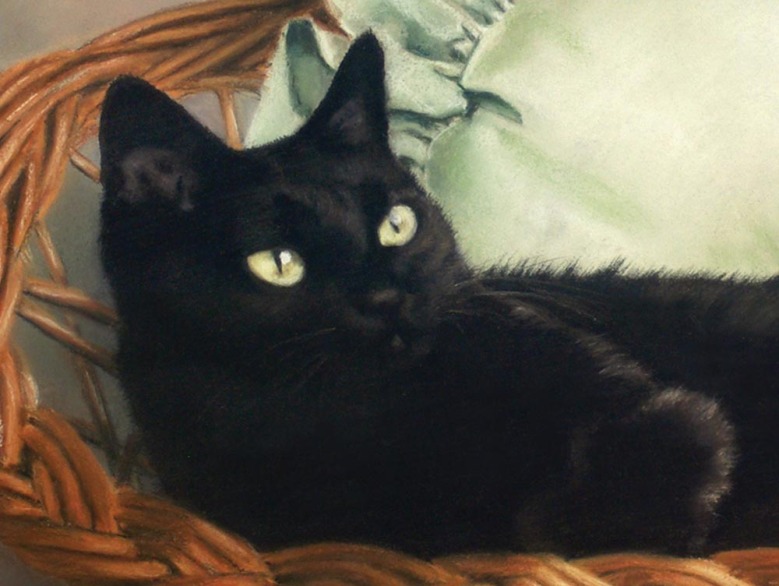 This portrait was a turning point for me. With each portrait I’d done I had experimented with colors and techniques and been able to start visualizing the way I’d work certain areas as I studied my reference photos, determining the colors, the way I’d apply and blend them so the decisions didn’t even seem conscious.

I remember finishing work on Samantha’s eyes, leaving to take a break, and looking later to see things I didn’t even remember doing, colors applied, blends and clarified edges I hadn’t consciously decided to create, the clarity of her eye in front of her pupil and the shadows and highlights within her eye, highlights on her face and paw, I didn’t know how I’d done this. I knew I’d reached a new level of skill and observation, and with it the confidence that I was on the right path. For many years, Samantha was the signature of my my business, on my business card and brochure until the portrait of Stanley, which is my signature portrait now.

Choosing Samantha as the cover kitty 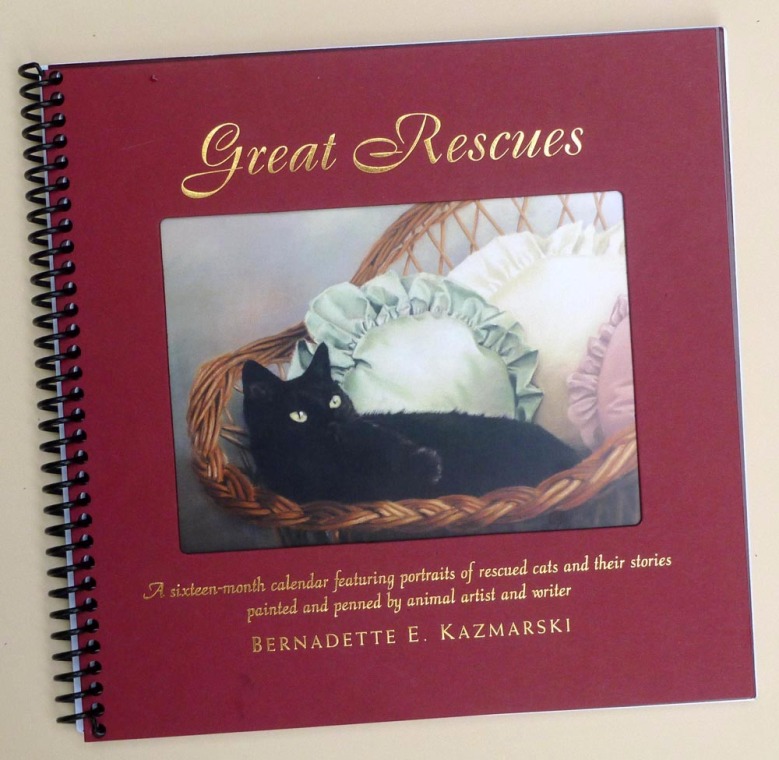 Samantha as the cover kitty.

I had visualized this project, cover and all, for over a decade, and in a corner of my mind I had always pictured Samantha on the cover, possibly because she had also been on my brochure and her portrait meant so much to me as an artist. I knew I wanted to use a warm, rich color for the cover, dark enough to support the foil stamped text I had in mind. I had initially used the portrait of Bandit because of the red in his portrait and how I love that portrait as well, but my heart went for the little black kitty and the portrait that had changed my outlook on my career as an artist.

Samantha’s mom agreed for Samantha to be on the cover; it’s one thing to be in the book, quite another to be on the cover and therefore see your kitty’s portrait all over the place as I promote the book. I knew how she felt about Samantha still, after all these years, and that might be painful. In the end, it’s a joy for her to have a copy forever on her coffee table so she can not only look at her portraits on the wall, but her copy of the calendar in her living room.

Read other stories about cats and their rescuers from Great Rescues.

The Cat of a Lifetime

A Bridge Between the Ages

I’ll Be Seeing You

Irina and Isis, Saved from the Flood

Read other stories about cats and their rescuers from Great Rescues.

A Bridge Between the Ages

I’ll Be Seeing You

This portrait and rescue story are featured in Great Rescues Calendar and Gift Book offered at www.MyThreeCats.com. Visit to read about it and purchase your copy today!

« The Cat of a Lifetime
September Cat-toon by Scott Nickel »